Noam Chomsky. For those familiar, the name conjures perhaps ‘great thinker’ above all else. Chomsky, 87, has dedicated his time on Earth to discussing, contemplating and more importantly, questioning the reason ‘why’ on all matter; from the commercial media who “brainwash” those who read it, to the two-party illusion that is our political system.

For some years now, Chomsky has warned those who care to listen, on the perils facing the world and the United States. Before Trump announced he would run for presidency, Chomsky, in 2010, warns Chris Hedges in a 2010 interview, that the “growing disillusionment, the justified anger and the absence of any coherent response” would pave the way for a “charismatic figure” to claim they have the answers and fill the void.

“The United States is extremely lucky that no honest, charismatic figure has arisen. Every charismatic figure is such an obvious crook that he destroys himself, like McCarthy or Nixon or the evangelist preachers. If somebody comes along who is charismatic and honest this country is in real trouble because of the frustration, disillusionment, the justified anger and the absence of any coherent response. What are people supposed to think if someone says ‘I have got an answer, we have an enemy’? There it was, the Jews. Here, it will be the illegal immigrants and the blacks. We will be told that white males are a persecuted minority.”

Chomsky warns of the dangers, drawing on history’s cruel diary as a reminder of what happened in Germany.

“We will be told we have to defend ourselves and the honor of the nation. Military force will be exalted. People will be beaten up. This could become an overwhelming force. And if it happens it will be more dangerous than Germany. The United States is the world power. Germany was powerful but had more powerful antagonists. I don’t think all this is very far away. If the polls are accurate it is not the Republicans but the right-wing Republicans, the crazed Republicans, who will sweep the next election.”

Over the last 30 years, according to Chomsky, people have been “left out” of economic growth. 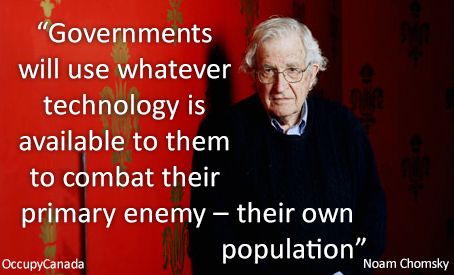 People, “who are angry at everything” are those who voted for Trump, Chomsky explained recently. The working class, middle class; those that have a strong sense of everything being taken away from them. Those who have nothing to lose; who are suffering financially, economically.

“The phenomena we’re seeing here is generalised rage,” he says of the 2016 elections. Every time Trump makes a nasty comment about whoever, his popularity goes up because it’s based on hate, hate and fear,” Chomsky explains. “And its unfortunately kind of reminiscent of something unpleasant, Germany not many years ago, and it’s worth remembering that in the 1920s, Germany was the absolute peak of western civilization, in the arts, in the sciences, regarded as a model of democracy … it went from the peak of western civilization to the absolute depths of human history within 10 years.”

The importance of recognizing where the world is at today, is vital. Perhaps it is even more significant to suggest that any dismay or disillusionment by, not particularly Trump’s win, but the political system in which has enabled such a cacophony, such a mess, is a political system that is a complete and utter farce.

The system is broken, folks. This is what Chomsky alludes to in his discussions. The “scattering of resistance” to these things is only but a scattering. The bright side to these elections, however, is that finally, people will be forced to see things for what they are. And only with something so ludicrous as the 2016 political theatre, can change ever come to eventuate.

One thought on “Chomsky: Hate and Fear Caused Trump’s Rise, Is it Reminiscent of Nazi Germany?”